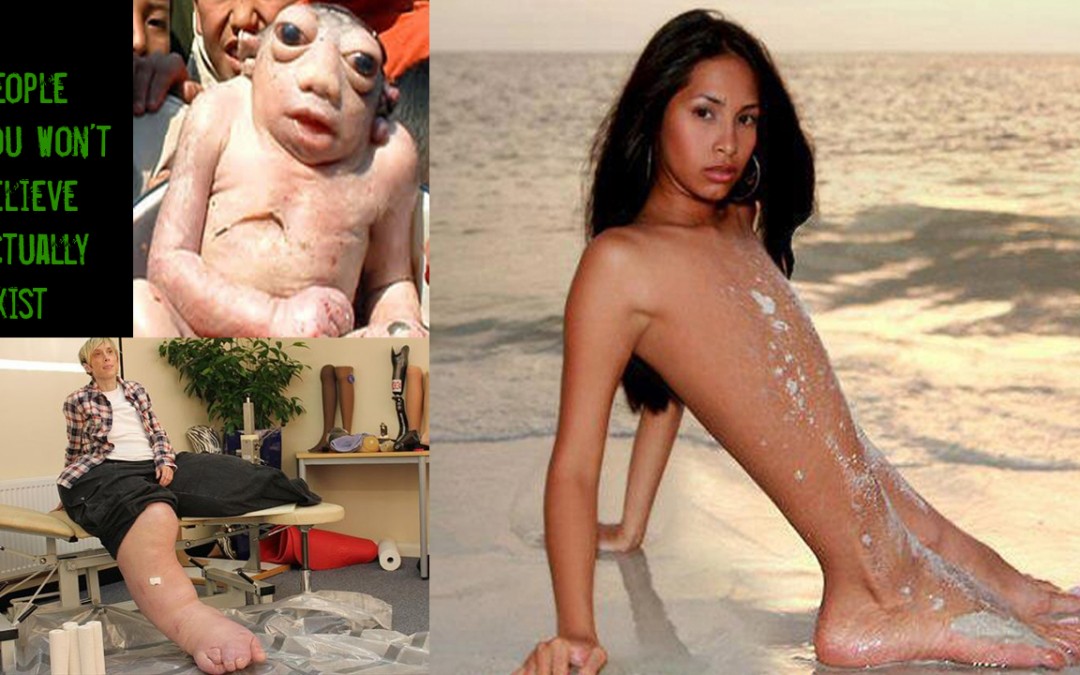 From the real-life Papa Smurf to an Indian child with super hands, these are 10 people You won’t Believe actually exist.

24 year old Michele Kobke made headlines in 2013 due to her tiny 16 inch waist. Unlike many others in this list, who were born differently from other babies, she made the conscious choice to modify her body. By sleeping in a corset every night for 3 years she reduced her waist by 9 inches. Even know her waist is actually smaller than most 2 year olds, she still wears tight corsets with the hope goal of slimming down by another 2 inches – a goal that doctors have warned against. They warn her that if she continues to do this, the damage to her spine may prevent her from being able to stand up.

She already suffers from the blatant health problems that come with having a stomach that small. Which sounds quite bad to us modern humans… but back in the Victorian era she would have been the talk of the town.

Many Sellars is Unique. She suffers from a condition that has never been discovered in another human. She was born with legs twice the size of other babies – and as she grew into adulthood her legs and feet never stopped growing. To this day doctors are baffled by Mandy’s genetics. In 2010 they were forced to amputate one of her legs. But 22 months after the surgery, the leg started to grow back. At this point the new leg weighs over 40 pounds and shows no signs that it will stop growing. What the doctors do know about her condition is that it belongs to a group of genetic mutations so rare that only around 120 people are ever known to have ever had it.

Kaleem is a young lad from India. At 8 years old he has been rejected by local schools after his hands grew far larger than human hands ever tend to. Doctors in India have never seen anyone like Kaleem before. He reminds me of Mandy Sellars, especially considering that when he was born both his hands were twice the size of a regular babies. Since his early years his parents have wanted to receive help for him. But as he comes from a poor family, there really isn’t much that can be done for him. But that’s okay because he’s actually a perfectly healthy kid. His hands weigh 28 pounds and each measure 13 inches from palm to finger tip. With his community now raising money for his medical care the general consensus is that he can be effectively treated.

Amoo Hadji lives in Iran and hasn’t washed himself for 60 years. No one has any idea why he has refused to bathe for so many decades but I think it’s fair to assume that he’s completely mental. One of the few things he owns is a huge steel pipe that he uses to smoke animal dung. But he is around 80 years old at this point so maybe inhaling animal excrement is the secret to immortality. That might change the way we depict the fountain of youth though.

Years of dirt and mud have coated his skin to the point that he now looks more orc than man. He is a lonely nomad, who usually sleeps in a tiny room that someone who feels sorry for him once built. He seems happy though.

Paul Karason became internet famous after his skin turned blue. And I know what you guys are thinking: how did this man have blue skin? It all began when he was suffering from a brief period of skin problems. He decided that the best way to combat this problem was to rub a silver compound on his face- and it actually worked!!

But at the time he had no idea that one of the side effects of it would be his skin changing colour. To his horror, the change was permanent, and he was soon given the nickname Papa Smurf. A nickname he always hated. Being an old man he also hated everything else. Silver preparation is a very old treatment method. It was fazed out when penicillin was introduced for obvious reasons.

Wang Fang is a Chinese woman born with deformed feet. The deformation being her feet having grown backwards, which was followed by doctors warning her parents that she may never walk. Now aged 35, not only can she walk but she can run faster than anyone she knows. She has a regular job as a waitress and lives a completely normal life apart from having to wear shoes backwards. To suit this she insists that she is not disabled.

Claudio Oliveira is a Brazilian man who was born with an upside-down head. The problem is that his neck is folded back on itself which forces him to see the world from the top-down. But his unique perspective seems to have helped him get ahead in his chosen career as a motivational speaker. The 38 year old has come a long way. When he was a baby doctors tried to convince his mother to stop feeding him, arguing that he could never survive. As a reaction to this his parents never took him back to the hospital. But now he flies all over the world to give speeches.

Niamh Geaney recently took part in a social experiment. The aim of the experiment was to find someone just like her within 28 days. By use of Social media they were successful. It would appear that Niamh has discovered her doppelgänger because Karen Branigan looks just like her. After finding each other online they met in person and engaged in a long discussion about what it’s like to be the same person. No one knows how these 2 women are basically the same person but it’s probably because of god or Jesus or something. Both of them have sisters that they look nothing alike. They’re like mythical creatures.

With an 8 foot circumference, Mikel Ruffinelli has the largest hips in the world. Standing 5 foot 4 she claims to have the body that all women envy. Mikel has 4 children from what I imagine were easy births.

Carlos Rodriguez is known internationally by the affectionate nickname ‘halfskull’. They say a near death experience would take something away from all of us. This was certainly true for Carlos when he lost half of his head in a brutal car incident. As you would expect, he lost a significant part of his brain but he can function just as well as he could before the accident. He now spends his time warning young people against the dangers of driving high-speed metal boxes. He first gained attention when he was arrested and his mugshot went viral. He wouldn’t tell the police his name so on paperwork they simply referred to him as “half a head”. Lets be honest. Of all the people you won’t believe actually exist… you won’t believe Carlos exists.